One of the biggest shows to hit the AMC network was Breaking Bad. The show ran from 2008 to 2013 and even though it’s off the air, the show contained many popular and memorable characters. 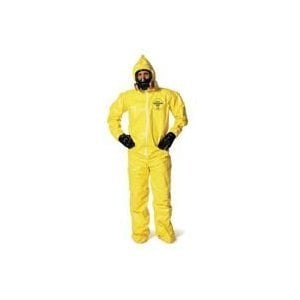 If you’re looking for an easily recognizable character costume to use for Halloween, Walter White is a great choice. On Breaking Bad, Walt wore several different outfits, but his most remembered one is the yellow toxic suit he frequently wore while working with crystal meth.

The yellow suit Breaking Bad costume comes with a yellow jumpsuit that zips up in the back and has a hood you can pull up. The jumpsuit often comes with elastic in the wrists and ankles.

It may also include a black mask similar to the one Walt often wore when working. The mask may have a fake breathing system and foam surrounding it. Blue Latex gloves that go about three inches past the wrist are also included with the costume.

If you want to accessorize, you can also find a goatee that comes with self-adhesives that stay on for a relatively long amount of time. The costume may also include the glasses similar to the ones Walt was always seen wearing on the show, but you’ll have to check to see what accessories are sold jointly with the costume.

Of course, you can also dress up in a hat and dark sunglasses if you want to go as Walt’s alter ego, Heizenberg. Another easily recognizable character costume is Jessie Pinkman. The costume is similar to Walt’s in several ways. Jesse’s costume is a yellow toxic suit with elastic in the wrists.

The suit zips up in the front and may come with either black or blue Latex gloves. Jesse’s costume also has a mask with a fake breathing system. However, Jesse’s costume may include goggles, which is something not featured in Walt’s costume.

If you’re going with a group of friends, there are a few other character costumes to look into. The first is a Hank Schrader costume. The costume comes with a law enforcement vest, handcuffs, and plastic radio. It may also include a skin cap to give you the bald look Hank had in the show.

The show doesn’t include many standout female characters, but if you’re looking to dress up as one, you might want to check out the costume for Skyler White. The costume includes a purple or black wrap dress, and can be a maternity dress. The costume may also come with a blond, straight haired wig that’s similar to the hairstyle Skyler had in the show.