Home » Did I Breastfeed My Child a Mouthful of Tooth Decay?

I took my 4 year old to the dentist today for a fairly routine checkup. She had lost a tooth a few weeks ago but we weren’t convinced it was the all-important first tooth since it was a canine and actually came out in pieces! I think I was in denial about the fact that it could be decayed. In fact, there is actually a possible infection and she will need a spacer so the tooth coming up in about 5 years won’t be crowded out by the molars and pushed in front. 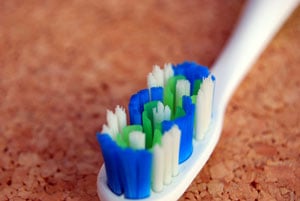 Does breastfeeding cause cavities?

Turns out, she has numerous possible cavities and two possible infections with the possibility of needing two spacers.

My child is not even five years old! How could this happen? One thing the dentist asked was if I let her walk around with a bottle or nurse her in bed at night. Um, guilty. On both counts.

I breastfed my first child until 8 months when we weaned for various reasons. She was always a difficult feed so after she weaned, it would take her a long time to finish her milk. For this reason, I got her a stainless steel sippy cup to help keep the milk cold. I researched this to make sure I purchased something that would actually work, and the cup I purchased was supposed to keep the milk cold for 5 hours. Yes, sometimes it took her that long to finish milk!

But, I digress. I loved nursing her in bed. She was my first baby and I will always cherish that time I had with her, sleeping next to her for so many months. Hearing her steady breathing as I drifted off to sleep, inhaling her sweet baby scent, I was completely intoxicated with both innocence and responsibility, and it rendered me unable to return her to her crib. Nor could I, since she insisted on seeping with me. Basically as soon as she came home from the hospital, she screamed until she was placed in the safety of my arms.

So back to my original question: did I cause my child’s tooth decay? Was I not strong enough to make her sleep alone in the crib, where she would safely sleep without any remains of milk on her teeth and gums?

Thank you A Nation of Moms for this really great explanation:

Although breast milk is sweet and contains lactose, it also has a protectant, lactoferrin, that attacks decay-causing bacteria. The reason why breast milk is so often mistakenly linked to tooth decay is because it is very sticky. It sticks onto those baby teeth like a gooey coating, which in and of itself is not bad for teeth. It’s when you add table foods to the mix that it becomes, well, a rather sticky situation. Breast milk makes other foods stick to the child’s teeth and that, my friends, is the culprit of tooth decay.

So why can’t dentists just explain this fact and that it’s a really great idea to brush your child’s teeth before and after eating solids while he or she is breastfeeding? I would rather do that than deny my child the extra comfort of night nursing.