Wasps may become highly defensive if their nest is troubled. Wasps could be in the middle of the air and release the warning pheromone from the casual swat. Sometimes it takes a DIY Wasp Trap to get rid of wasps if there are many of them and/or they are aggressive. Otherwise you can try some of these Natural Wasp Repellent Tips.

Why Make a DIY Wasp Trap?

Wasps are much more aggressive than bees because they are predatory and defend their youth incredibly. In late months of summer, they can be particularly vicious.

How to Keep Wasps Away

Things You Need to Make a DIY Wasp Trap

How to Make a Wasp Trap

Cut the 2-liter soda bottle along the line. The top part of the bottle will serve as a funnel and will fit inside the bottom half of the bottle. Take care while doing this step. Use a knife, box cutter, or a sharp pair of scissors to cut the top off of the bottle at the line you made.

Tape the two pieces together around the cut edge so the funnel stays in place. Then poke two holes on opposite sides of the rim and attach some string or wire to make a handle for hanging.

You need to have the right kind of bait and it changes depending on the season. In early spring, when wasps are reproducing, they like protein. Later in summer, they want sugar solutions.

In the spring, you can use grease from cooked meat to attract the wasps. Add dish soap to water with a ratio of 1:1 and add the grease. The dish soap will aid in drowning the wasps. In the summer I like to use a sugar solution.  Combine 1 cup apple cider vinegar, 1 cup sugar and 1/2 cup water in a bowl. Stir until the sugar starts to dissolve. This sweet solution attracts the wasps. Then add 2 tablespoons to 1/4 cup dish soap and stir gently.

The dish soap helps to inhibit the wasp’s ability to fly, causing them to drown. It sounds horrible I know – but when there are a lot of wasps around this is a good way to get rid of them. Otherwise, you might try these Natural Wasp Repellent Tips to try and keep them away.

Pour the bait solution into the bottle, being careful to leave an inch underneath the funnel so wasps can enter.

Note: Do not add honey to your trap. Honey will attract and trap honeybees that are very important, nonaggressive pollinators.While wasps are also beneficial for crops and plants, they can be aggressive and sometimes a trap is necessary.

Find a good tree branch on which to hang your trap, preferably one that isn’t too close to your home or space where you hang out.

When cleaning out the trap, it’s best to bury the wasps in the ground or put them in a plastic bag that is tightly tied closed to throw out in the garbage. If you happen to crush the wasps while getting rid of them, the bodies will release a scent that alerts other wasps of danger, potentially attracting a swarm. It’s probably a much better idea to just get rid of the entire trap together in a tied plastic bag and make a new one with a new 2-liter bottle. 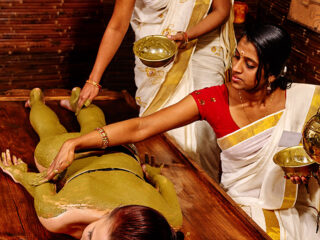