If you have ever been unfortunate enough to be on the receiving end of a wasp sting, you will know that they can be incredibly painful. There are a few things that you can do to help ease the pain and swelling. Here are some easy Home Remedies for Wasp Stings.

If you are looking for some tips on how to keep wasps away, then you have come to the right place. Wasps can be a real nuisance, especially if you are trying to enjoy a picnic or barbecue. There are a few things that you can do to deter them from coming into your personal space if you learn these basic Wasp Repellent Tips.

Even though wasps are generally considered to be pests, they can be beneficial to have around. They help pollinate plants and control other insect populations. However, wasps can become aggressive if they feel threatened, and their stings can be painful. If you’re unfortunate enough to get stung by a wasp, there are a few home remedies that can help alleviate the pain and swelling.

Wasp stings can be painful, but there are a few home remedies that can help alleviate the symptoms. Applying ice, soaking in Epsom salt, and taking over-the-counter medication can all help reduce pain and swelling. If you’re still experiencing symptoms after trying these home remedies, be sure to consult with your doctor.

What is the Fastest Way to Heal a Wasp Sting?

If you’ve ever been unfortunate enough to get stung by a wasp, you know that the pain can be quite severe. The good news is that there are several things you can do to speed up the healing process. First, it’s important to remove the stinger as soon as possible. This can be done with a pair of tweezers or by scraping the area with a credit card.

Next, wash the area with soap and water to reduce the risk of infection. Finally, apply a cold compress or take an antihistamine to help reduce swelling and pain. By following these simple steps, you can help ensure that your wasp sting heals quickly and without complications.

What are Symptoms of Allergic Reaction to Wasp Sting

A wasp sting can cause a range of symptoms, from a mild local reaction to a more serious allergic reaction. The most common symptom of a wasp sting is a sharp pain at the site of the sting. This is followed by swelling, redness, and itchiness. Some people may also experience hives, swelling of the face or throat, difficulty breathing, or dizziness.

These more severe symptoms can be life-threatening and require immediate medical attention. If you are stung by a wasp and experience any of these symptoms, it is important to seek medical help right away.

Do Wasp Sting or Bite?

When most people think of wasps, they think of the stinging insects that can ruin a picnic or outdoor gathering. But do wasps actually sting or bite? The answer is a bit complicated. Wasps have a stinger that they use to inject venom into their prey. However, they can also use their mandibles (jaws) to bite. So, technically, wasps both sting and bite. The good news is that wasp venom is not usually harmful to humans.

In fact, in most cases, the only thing you’ll experience from a wasp sting is a brief moment of pain followed by some swelling and redness. In rare cases, however, people can have an allergic reaction to wasp venom, which can be life-threatening. If you are allergic to wasp stings, it’s important to seek medical attention immediately after being stung.

Wasps are actually extremely beneficial to humans as they prey upon almost every insect species on earth either for food or as a host for its parasitic larvae. Wasps are so good at controlling pest populations that the agriculture industry now regularly deploys them to protect crops. Regardless, we all want to know wasp repellent strategies to keep them from stinging US!

Why Do Wasps Sting?

Wasps sting to defend themselves. If a female wasp feels her home is under attack or threatened she will protect the wasp nest and sting. Wasps also simply get annoyed. The constant waving of arms and newspapers while trying to get rid of a wasp can make it very annoyed and feel threatened.

The venom contained in a bee or wasp sting induces a local toxic reaction at the site of attack. In some people, components of the venom can cause an allergic reaction. These home remedies for wasp stings are for people that are not allergic to wasps or hornets.

Wasps do not leave stingers behind, but bees do. If you are stung by a bee, do NOT use tweezers to get it out as that will only increase the venom being injected into your body. Instead, use your fingernail to scrape the stinger.

Before using any of these home remedies for wasp stings,
make sure to wash your hands and the affected area with soap and water!

How Long Does it Take for a Wasp Sting to Go Away?

Most wasp stings will go away on their own within a few hours. However, if you experience more severe symptoms, such as difficulty breathing or swelling of the throat, you should seek medical attention immediately. For minor reactions, the following treatments may help to ease the pain:

Ice is a great remedy for wasp sting by reducing the swelling from a wasp sting as well as both bees and hornet stings, the cold temperature slows down the blood flow to the insect sting.

To treat insect stings using ice, take an ice cube or an ice pack and place it on the wasp sting for around 20 minutes. This will help with the pain and reduce the swelling.

Note: If using ice cubes wrap in a paper towel or a damp cloth to protect the affected area.

Garlic acts as a pain relief for insect stings. For this home remedy crush a clove of garlic and slather it on the sting. You want to get the juices from the garlic on the sting site. Then put a bandaid on the affected area and let the garlic do its magic.

Onions work great on bee and wasp stings! Just cut an onion in half and place the juicy side on the insect sting, pressing gently until the pain has reduced.

Cucumber is so great at treating insect stings because it is a natural astringent which tends to constrict body tissues. To use cucumber as a home remedy for wasp stings, cut a slice of cucumber and rub it on the sting. This will help reduce the pain and cool the area.

There are quite a few herbs that can help heal a wasp sting but by far the best one is basil, when crushed it can reduce pain and swelling using the juices from the leaves.

After crushing, lay the basil on the wasp sting for 10-15 minutes. Repeat as needed.

Did you know that wasps can sting you many times instead of just once like a bee can? That’s why it’s so helpful to know these home remedies for wasps to help get rid of them from your home and yard! It’s not a great idea to kill them if we can help it because they eat flies and spiders and can help with crops in farmer’s fields.

How to Get Rid of Wasps and Hornets Without Chemicals 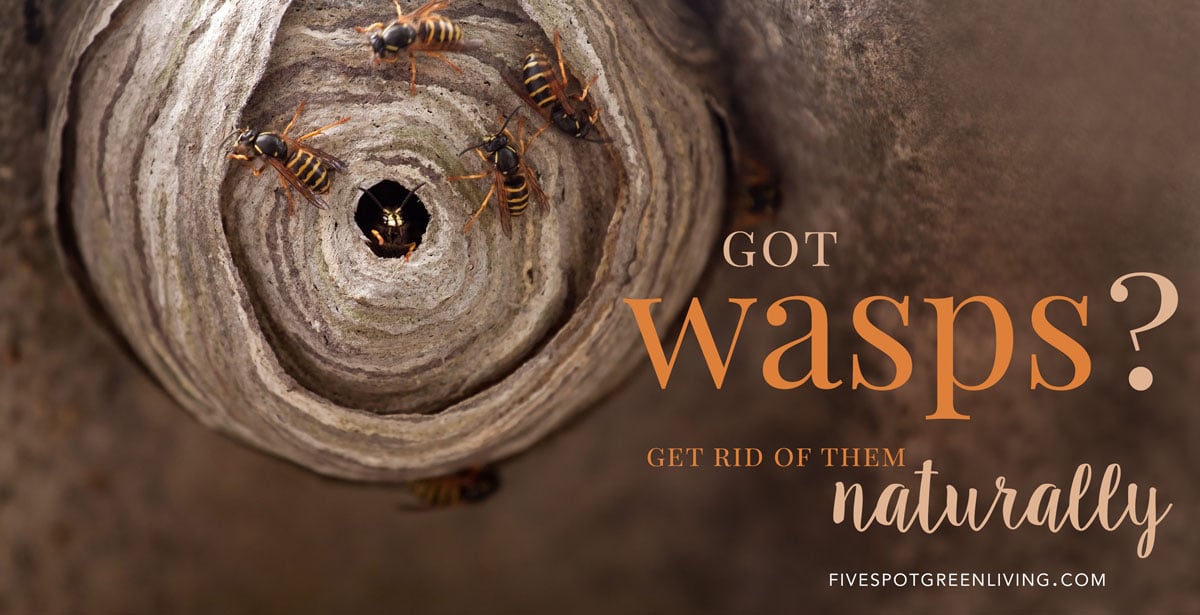 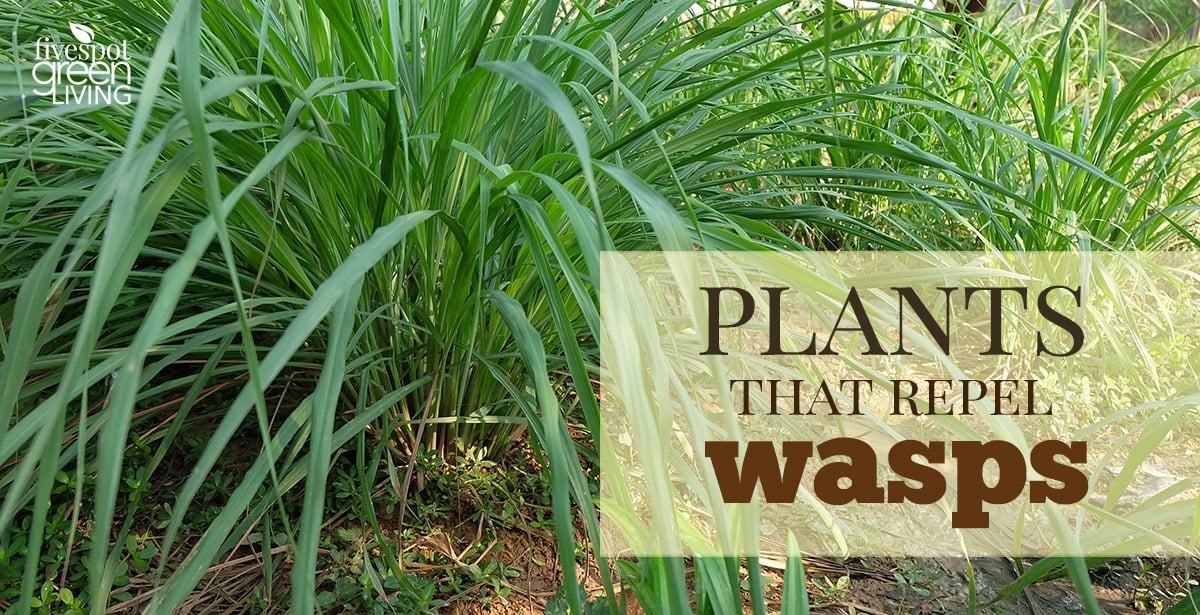