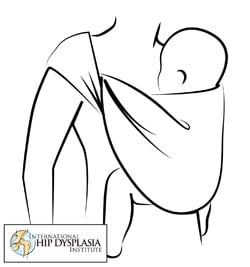 My daughter was diagnosed with DDH at 16 months. Although she had all the risk factors, including 3 generations of the condition, we didn’t know very much about it and didn’t notice the warning signs. It wasn’t until she was 15 months and she still wasn’t walking and when she did play outside with her walker, we noticed a limp in her step. That’s when we realized she had so many other warning signs and risk factors and the lump in my throat was so big I could barely breathe. 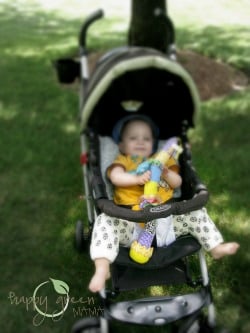 My baby in her spica cast.

My daughter had three out of four of these risk factors – although she wasn’t born breech, she was in the same position in the womb for a long time without changing position, which led to torticollis. After we noticed the limping that sunny weekend day, I gave my daughter a bath and steeled myself to look at the backs of her thighs to count the folds in her skin. Sure enough, as clear as anything, there was an extra fold on her left leg, which meant that the joint in her hip was not connecting properly.

I remember the day we had the initial x-rays done. The lab technicians were not legally able to tell me anything but I overheard them talking about how clear the problem was on the scan. And it was.

We went on to a series of appointments in Boston with one of the best orthopedic surgeons in the country and my little bunny got a full cast covering her hips and her legs. It was awful. She was 16 months old and she couldn’t move her legs. The night in the hospital wasn’t even the worst part. I think the worst part was definitely when the pain set in on the second day, from muscle cramping. She just cried and I couldn’t do anything about it. I wanted to rip the cast off of her and relieve her of this pain and confusion. They say that DDH is the form of hip dysplasia that isn’t present at birth (that is called congenital hip dysplasia). We may have discovered it at an earlier age had we been looking for it, but it doesn’t mean we would have avoided the spica cast.

I bonded with my daughter during this time. While her friends were starting to walk and swimming and playing at the playground, we went for walks in the stroller, we colored…A LOT. We also read lots of books, played with playdough and the many toys donated by generous family and friends.

I carried my daughter in the wrap during her infancy. Every time I tried to put her down she cried, so I carried her and she was happy. I knew nothing about the relationship between baby wearing and hip dysplasia, especially when there is a family history and other risk factors. I don’t know if my babywearing contributed to my daughter’s DDH, there really wasn’t enough information at the time regarding the link. I was a new mom, I was still trying to work at home, and I didn’t do my research about wearing a newborn. I used a Baby Bjorn for the first six weeks because it’s all I had and knew, but it just hurt my back! Ugh.

An excerpt from the article that inspired me to write this post:

I am told that even though baby carrier choices are expanding, the only obvious option to most parents, especially those looking to big box stores for guidance, is the Baby Bjorn and its various knock-offs. A lot of parents have ended up equating babywearing with the Bjorn, and I come across parents all the time who say that their children, especially their boys, hate babywearing, because they only encounterd that one specific type of carrier.

Not every child dislikes them, because they don’t cause pain, maybe just some discomfort, especially if a boy’s little penis gets squished as gravity puts pressure on the pelvic bone.

The real health problem with wearing a baby in a “dangling” narrow-bottomed carrier like the Bjorn is that it forces an unnatural and unhealthy streatching in the hip joints as gravity pulls the legs straight down.As it turns out, the International Hip Dysplasia Institute has an explanation–the bottom support fabric of these carriers is too narrow, which allows gravity to cause discomfort.

With this new baby, I have started wearing her in the Moby Wrap right from birth in the newborn cradle hold and have banished the Baby Bjorn. We are also taking the right steps to make sure we detect any hip dysplasia as soon as possible should it appear again. I just wish I had information on babywearing AND hip dysplasia when I was a new mom. There just isn’t much information out there on these two very closely related subjects. There is also a correlation between hip dysplasia and swaddling. When we had baby #2, we made a conscious decision not to swaddle after a few weeks and the bones begin to settle into place. Instead, we used a sleepsack for warmth and comfort. Some of these actually come with a built-in swaddle around the arms to let the legs and hips move freely, which is also necessary when swaddling with a blanket. I am keeping this in mind these days when swaddling the new baby, since she seems to really respond to it. Check out the video below for instructions on proper swaddling.

« No 'Poo? An Alternative to Everyday Buildup
Essential Oils for Pest Control »