Did you know the price of potatoes is going up? Growing potatoes is easy, and with some container gardening techniques it is possible even if you only have a balcony or roof garden! 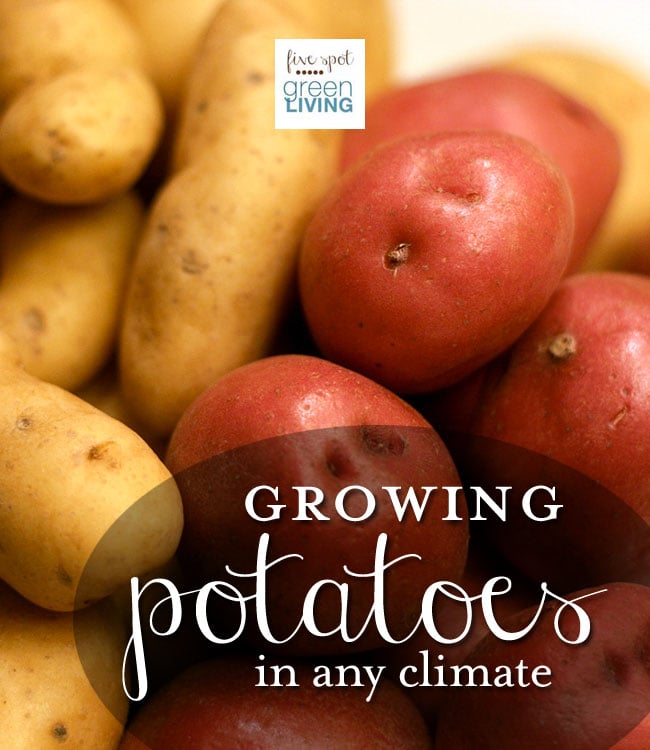 Read on to discover all you need to know about growing potatoes to save money and have organic potatoes at your fingertips (literally). Since potatoes are grown and harvested as an annual, USDA Hardiness Zones do not apply, which is great so even us New Englanders with short summers can grow potatoes at home and reap the benefits.

There are so many different varieties of potato that it would not be possible to list them all here. The main difference between them is a matter of how long they take to mature, which of course affects when they are ready to harvest.

In cooler climates you can choose from early varieties (early summer), second earlies (summer) or main crop potatoes (late summer to early fall). In climates like USDA 7 and 8, choose early varieties that will be ready before the weather turns too hot for them. In warmer climates than that, plant in September to harvest during the winter.

In temperate climates such as the UK or USDA zone 3-6, you could go for earlies if you want to grow something else in the spot later, or you could have all three varieties if you have the space, and have a good long potato season. If you do this, be sure to mark the plots carefully so that you know which potatoes to dig up when. 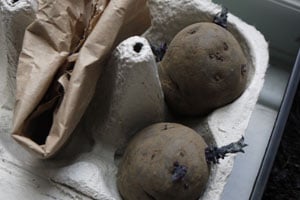 Chitting is a simple stage in growing potatoes that encourages the seed potatoes (which are really just full size potatoes) to sprout before they are planted. It helps you to weed out any that fail as well as speeding up the maturing process in the ground.

You need to start chitting in January or February depending on your climate. Chitting begins six weeks before planting. 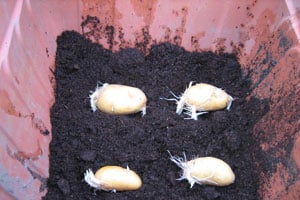 All you have to do is prepare dry trays or egg boxes in a place that gets plenty of light, like a window sill. Look at the seed potatoes and you will see that one end is more rounded and has several ‘eyes’ which will sprout. Stand the potatoes in the trays with this end pointing up.

The shoots should grow to between half an inch and an inch by the time you are ready to plant.

Planting In The Garden

Dig trenches for growing potatoes about 4 inches deep with organic matter rather than rich soil. Add a little fertilizer or compost.

Plant the potatoes with the sprouts pointing upward, about a foot apart. Replace the earth around them carefully to avoid breaking the sprouts. 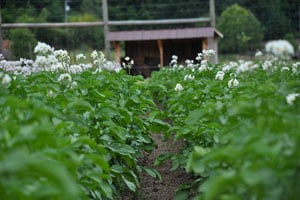 Keep an eye on the beds and each time the sprouts appear above ground, pile earth onto them so that they are buried. Repeat this several times until you have a mound about 6 inches high.

Potatoes can be harvested from the time that the flowers open, but you can choose to leave them longer. They should all be harvested well before the first frost, or before the weather turns hot if you are in the south. Be sure to find them all – you will get several potatoes from one seed potato, and it is easy to miss some when you are growing potatoes in the garden.

If you are planning to store your potatoes rather than eating them right away, cut off the above-ground growth two weeks before you dig them up. This will harden the skins, helping them to store better. 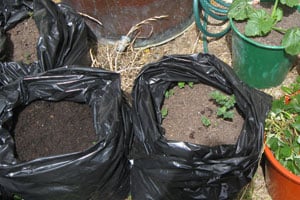 Potatoes can be grown in containers or even in plastic bags. You will need strong bags like the ones that compost is supplied in. Put in a layer of good quality compost to about one-quarter full and make drainage holes in the bottom of the bag. Then place three chitted potatoes in the bag with sprouts upward and cover them with more compost.

Water the potatoes regularly and keep burying the shoots with more compost as they appear. After about 3 months the potatoes will be ready. Cut the bag open (or empty it into a container if you want to reuse the bag) and remove your potatoes from the compost.

Now that you have seen how simple growing potatoes can be, I am sure you will want to begin choosing your varieties right away! Check out more container gardening posts here!

Make sure to see this post from TipNut.com about 7 Plants that Help Control Potato Bugs.

Wow~ That was really interesting! I had no idea of the science that went behind chitting and planting a potato. I would love to give it a try maybe next year!